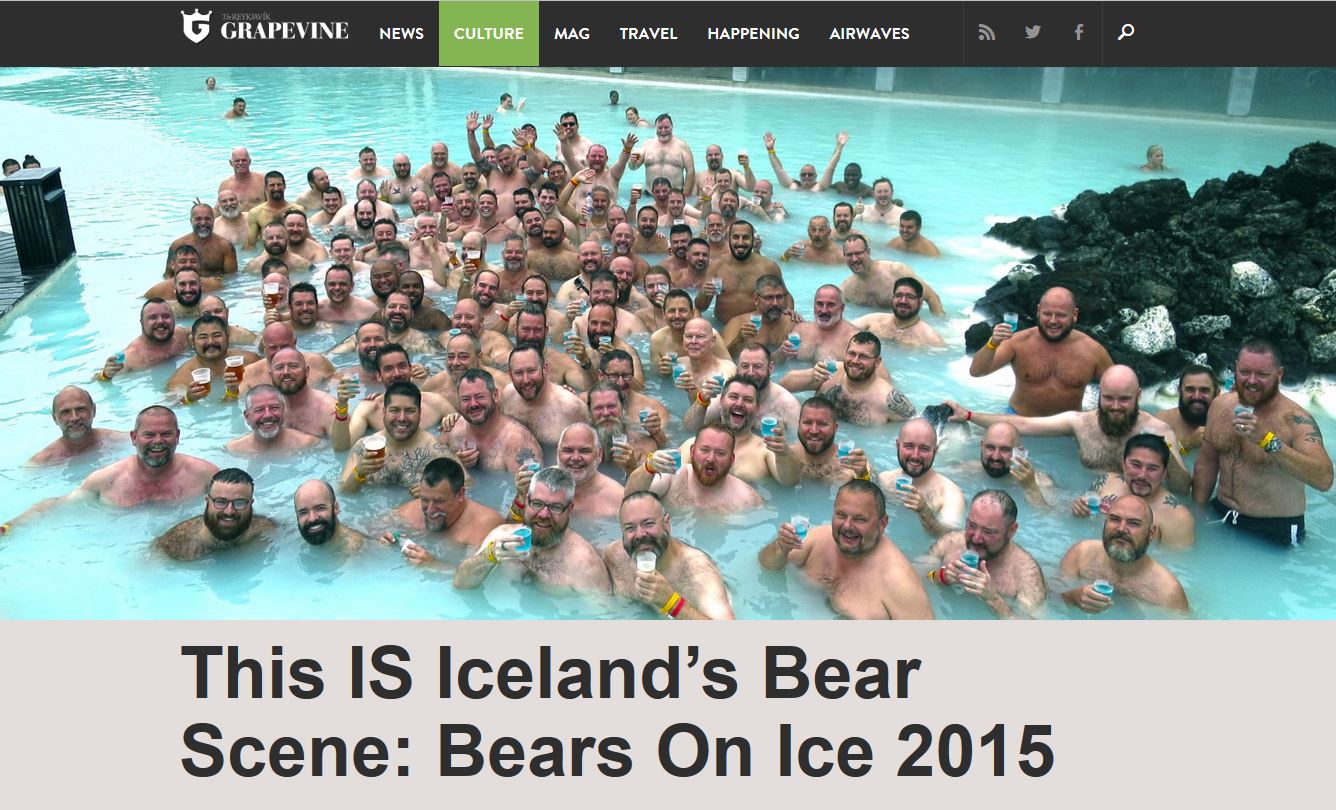 This past weekend, an international cavalcade of burly men inundated the City of Reykjavík and its surrounding natural wonders. Who were these burly men? What did they want? Why were so many of them wearing cargo shorts?

They were the men of Bears On Ice, and they came here to party. Also to sightsee.

“When someone hears the word ‘Bear,’ or thinks of the bear scene, they immediately picture a certain look,” Frosti Jónsson, creator and lead organiser of this and all previous Bears On Ice events, told me. The “look” he refers to is approximately this: a hairy man with a large, burly build, more often bearded than not, and in his late thirties to early forties.

In reality, this image is just the tip of the iceBEARg. The bear scene has an entire subcultural taxonomy, mostly descriptive of physical characteristics, and occasionally attitudes. You’ve got your standard issue bears, your daddy bears, your muscle bears, red bears, polar bears; cubs, chubs, otters, and pups; foxes, silver foxes, wolves, etc.

From here, one can expand on each category even further (perhaps ad infinitum), incorporating age, personality traits, race and ethnicity, as well as kinks. There is even a term for the female friend of a bear—she’s called Goldilocks (though Bears On Ice is a men’s only event).

This IS Iceland’s bear scene

Bears On Ice began simply enough. “In Iceland the gay scene is very small,” said Frosti, “and at that time [2005] there was no bear scene at all—which is the scene that I like.”

Iceland’s small population, and a complex combination of other historical and contemporary factors, hasn’t easily allowed for a diversification and proliferation of subcultures within the larger LGBTQ+ context. Really, there isn’t much LGBTQ+ cultural space or scene at all, aside from the one massive, yearly Pride event, which takes precedence for financing, scheduling, and manpower.

Room for smaller events with a more specialized target audience is hard to come by. “So instead of waiting around for someone else to do it,” Frosti said, “I just did it myself.”

“I got a message from these two guys from London just asking if it was a good idea for them to come to Iceland to throw a one-off party. But I wanted to make something more out of it,” Frosti said. “So I decided, ‘Let’s do three days, and call it a Bear Event.’”

In its first year, eighteen men attended Bears On Ice. A success, certainly, but a humble one. The event quickly caught on, however. By the second year, attendance was in the mid-twenties. In 2015, the eleventh iteration of Bears On Ice sees upwards of 150 international attendees, along with a number of Iceland natives. “We’ve been fortunate to have had very likeable men from all over the world come in and join us,” Frosti said. “And many of them use the opportunity to come visit Iceland—to spend an extra few days, doing side trips and sightseeing.”

In this way, Bears On Ice demonstrates a healthy compromise between Iceland’s booming tourist industry and a self-directed, local sub-culture. Rather than sacrificing idiosyncratic elements of cultural identity for tourist bucks, Bears On Ice has found a healthy merger—providing a particular cultural experience with a chance to view Iceland’s natural offerings. The full package for the weekend’s events include a tour of the Golden Circle, and a trip to Blue Lagoon.

And, as with most things in Iceland: “It has become a lot bigger, but it’s still much smaller compared with other international bear events,” said Frosti. “We’re trying to keep it manageable. You should be able to meet people and remember their names.”

Beef. As far as the eye can see, beef

One of the weekend’s notably meatier events was the “top-off party” Friday night at Lavabarinn, which exemplified many of the positive benefits of such an event—body positivity, acceptance and nurturance of variety and diversity within a community. As Frosti said: “Inclusivity is the key word.”

Of course there is the added bonus of being surrounded by nothing but the type of person to whom one is attracted (buffet style), but that always seemed secondary to the forging and nurturing of social connections.

What was most apparent about the group was the diversity of age, shape and body type, and to some extent race and ethnicity (though less diverse in that respect than at other international events). All in attendance were equally on display in a non-judgmental environment. And, ideally, all would feel the same level of confidence and comfort. For some, it may even be one of the rare occasions when they feel so comfortable in their own skin.

“Everyone here is so welcoming,” said Joe, a self-described “polar bear” from the States who flew out with his partner for a sightseeing trip. Bears On Ice was serendipitous, happening on the same weekend. “It’s a great group of guys. And there’s none of what you can sometimes get at other bear events—A-list muscle bears strutting around, looking down on others.

This issue of exclusion within the bear scene has increased as the subculture has grown and evolved. There is a real divide that has formed between those obsessed with idealized male body image, along with maintaining the appearance and an air of hegemonic masculinity to the exclusion, and derision of “feminine” men, trans men, men of colour, and overweight men.

However, these ideals are not at all the kind Frosti envisions for Bears On Ice. “For us,” he says. “It’s all about being accepted for the way that you are.”

The afternoon trip to the Golden Circle had already made fast friends of the Bears On Ice. This helped when there were problems with the sound system. The top-off party was also successful as a shirtless social gathering. And when stereo issues were resolved, and the deep house offerings of the night got into full swing, everyone there was ready and willing to let loose—though there wasn’t much room to spare.

When venues like Lava Bar measured for capacity, I doubt they envisioned a crowd exclusively made up of large men. So space for dancing was a hot commodity; everyone got well acquainted with their neighbours real quick.

The largest party of the weekend was hosted in the basement of the National Theatre—which was the first location that was reasonably able to contain the combined bulk of the attendees. The night began with a DJ set from Frosti himself (as Bistro Boy) and DJ Dramatik, whose mixes fit the tone of the party to a T—a bit darker and harder than your standard gay bar fare.

Big Dipper put on a high-energy, camp-funny, polished show to rival any of his better sets back in the States. It seemed, however, that the crowd was somewhat split down the middle in its reception. Half were engaged and enjoying themselves (some in the know even singing along), while the other half seemed more perplexed than entertained (though most were still amused to varying degrees).

Dipper may have bit too outlandish for some of the partygoers—queer-adjacent, bear-themed hip-hop with an accompanying stripping of outlandish camp costume elements down to a red jockstrap. “He’s not the kind of act we would have in Iceland,” said Frosti. Which is the point.

Though perhaps a cold open for those who’d never come across an act like Dipper does run the risk of crowd confusion—especially with his millennial use of shallow irony to hide deep earnestness, combined with an eagerly brandished hip-hop ego Still, showcasing and celebrating variety is what Bears On Ice is all about.

The night then turned to dancing in the dark by the stage of the National Theatre, with others in the stands talking over the music about their dip in the Blue Lagoon and the natural wonders they’d seen, or swapping stories about their lives back home and their local bear scenes.

Bears On Ice truly was what Frosti had hoped for and promised: an open, welcoming community of international men, no two of whom were the same, accepting of and willing to engage with difference.