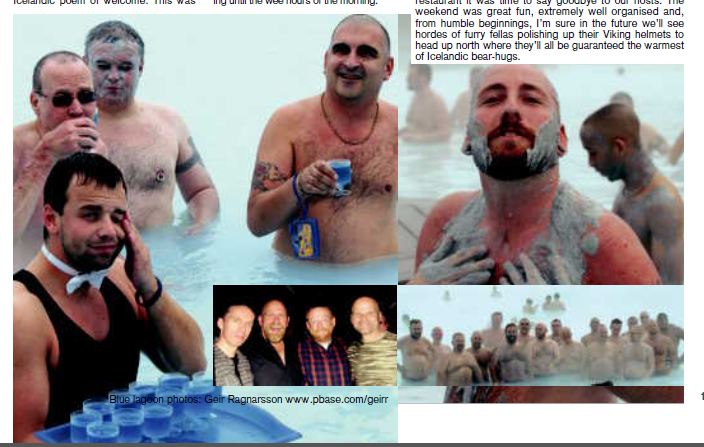 IT'S been a long hot summer for bears but autumn's finally here, the weather's cooling down and the grizzlies are busily brushing up their fur to embark on their annual winter migrations. This year, the season got off to an early start as Reykjavik proudly hosted it's first ever Bears on Ice weekend. A small but dedicated band of UK bears braved the sub Arctic temperatures to enjoy a weekend of hairy Viking 'rape and pillage' in the party capital of northern Europe. The weekend festivities kicked off on Friday night at the tiny Club MSC in the heart of downtown Reykjavik with the Vikings, Bears and Leather party. Here our host Frosti Jónsson, a fetching little blond and ginger cub, drew gasps of dismay when he threatened to recite an Icelandic poem of welcome. This was quickly followed by roars of approval when he offered to get his knob out instead!

With free shots of vodka and the cheapest drinks in town there was soon no room to swing an arctic fox. Trays of cucumber sandwiches kept the British contingent from feeling homesick and we were soon hobnobbing with the local crowd, a friendly mixed bunch of hulking blond polar bears with piercing blue eyes and their young Gothy boybabe admirers.

After midnight, a couple of harnessed bears were unceremoniously caged and forced to dance in a shameless act of bearsploitation. Meanwhile, a procession of hairy Joan Collins wanabees kept the sling in the dark room swinging and creaking until the wee hours of the morning. On Saturday afternoon it felt like being back at school again as we excitedly boarded a coach on a trip to the Blue Lagoon. Mini tidal waves surged around the Lagoon as 20 or so bears dived into the water in a frenzied rush to apply the famous blue silica mud face masks. A rugged black haired, bearded Icelandic hunk in black vest and bow tie served us some Blue Lagoon Cocktails and we soon resembled a group of Braveheart extras at an after show pool party. After the cocktails had kicked in it was all Esther Williams routines and pulling shorts off underwater and, for a while, the pool side sauna became the only gay sauna in Iceland. There was just time to have a swim around to get a closer look at the gorgeous fresh-faced local lads who we noted with approval were also frolicking around pulling each others shorts down and flashing their spectacular butts. After a lingering shower we emerged glowing and looking 20 years younger, but the price of youth will be tinder dry body hair and gallons of hair conditioner for months to come until our pelts grow back to normality.

Saturday night in Reykjavik means one thing - find a party, ANY party. Gay nightlife in such a small city is mixed with a capital 'M' and, when word got round that London's Come to Daddy had arrived for a one-off club night, there was no stopping the whole gay community coming over to check us out. It came as a bit of a shock to our furry manhood when we were invaded early on by legions of stunning blond Nordic lesbians engaged in mortal deep throat combat in a scene straight out of Come to Mummy.

The girls were soon joined by their high-camp boyfriends and before long the DJ had the crowd hopping under the Union Jacks to a mixture of classic disco and Handbag House hits. And what a mixed crowd! Muscle Mary's, Bears, hip students and diesel dykes all grinding away on the dance floor. Meanwhile, any poor unsuspecting foreign bears at the bar were quickly harpooned by the now seriously inebriated local boys and led away like Icelandic whales to the slaughter.

With a farewell Sunday brunch at the gay owned Jomfrien [Jómfrúin] restaurant it was time to say goodbye to our hosts. The weekend was great fun, extremely well organised and, from humble beginnings, I'm sure in the future we'll see hordes of furry fellas polishing up their Viking helmets to head up north where they'll all be guaranteed the warmest of Icelandic bear-hugs.